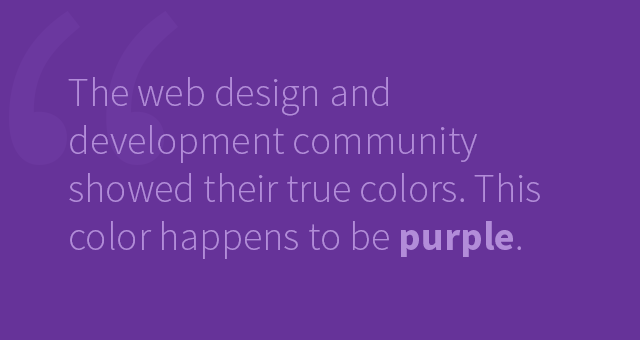 I’ve grown up on the Internet. It has been my career, my source of entertainment, and now I have learned… it is my community.

Though I know he has had an impact on the technologies I use daily, I don’t know Eric Meyer. I do not know his wife, Kat. I certainly never had the pleasure of meeting their daughter Rebecca.

Signing into Twitter on Thursday, June 12th, my feed was inundated with messages of support and condolences with #663399Becca trending and links to a wonderful article named, “The Color Purple”. Jeffrey Zeldman’s article introduced me to one of the most moving shows of support I have seen on the Internet.

At only six years, eleven and a half hours old and after a long battle with cancer, the daughter of Eric and Kat, Rebecca Alison Meyer, was finally pain free and at peace. Following her father’s tweets surrounding her passing created a lump in my throat that has yet to be squelched.

In his article, Zeldman shared Matt Robin’s idea to the community at large: Get #663399Becca trending on Twitter. A simple concept that has had a lasting impression on me.

The Internet is made of, for, and by people. These people: The creators, maintainers, and tinkerers all showed tremendous support for one of our own. Within the day, efforts were made with all major browsers to recognize the hex code #663399 as a standard CSS color under the name “RebeccaPurple”. After verifying with the Meyer family, Google, Microsoft, Apple, and Mozilla all committed to recognizing the new spec in future browser updates.

As if adding “RebeccaPurple” as the 141st CSS color wasn’t enough, much of the community also showed immediate visual support by changing their Twitter avatars to purple. The more creative variants of these weaved the color #663399 within their existing avatars or brands.

Few things are worse than the thought of losing a loved one. This experience showed me the strength of community that has developed around our profession. Few careers are as open to change and as welcoming to new individuals as web development and design. Open source efforts, Stack Overflow, and more are testaments to the community we have built. Let’s continue building.

What others have said: